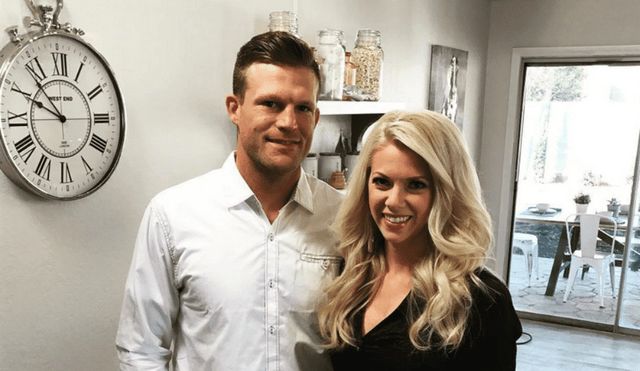 Aubrey and Bristol Marunde of “Flip or Flop Vegas” rarely play it safe when renovating a house. As proof, in the latest episode, “Go Bold or Go Home,” they choose a paint color combo that truly makes us cringe, initially.

Granted, the 2,2000-square-foot property near Nellis Air Force Base they bought in a short sale needs work. Lots of work! Built in 1999, when the Southwestern craze was beginning to fade, the home has random split levels and Mayan-pyramid-type steps all over—even on top of room dividers and reaching to the ceiling.

“My first thought is that we just entered an Aztec cave,” says Bristol.

So Aubrey’s idea is to take the home back in time: to the ’80s. “People who buy our properties are looking for something a little bit bold, a little bit edgy,” she says.

But are they eager to go ’80s edgy? Here’s how she tries to make it work.

Decide on a main color—and an accent

“The most important decision of the entire house is the color scheme,” says Aubrey. “If the colors are too bold, it might turn buyers off and affect the sale of the house.”

But since this is Vegas, she decides to take the major risk of using dark blue. Next, she goes even bolder by using metallic gold accents and hardware.

You read that right: gold.

“I’m taking a risk by adding gold accents throughout the entire house,” Aubrey says. “It was huge in the ’80s, but I think it’s making a comeback, and it won’t feel dated when everything else is updated.” Paint a small area first to make sure you like it

Aubrey can’t decide on the right shade of blue—she doesn’t want it to be too bright, yet if it’s too dark, it’ll look black. She picks a navy shade and has Bristol paint one interior door to test the color. She thinks the result looks awesome, and decides to use it on the other interior doors, the kitchen cabinets, and the master bathroom vanity.

Once you’ve made a choice, go all in!

Aubrey is firm about her blue-and-gold retro ’80s theme, so when one of her suppliers tells her he has blue mirrors left over from a nightclub remodel, she is all over it. Where will they go? The kitchen, of course!

“We’re going to wrap the entire kitchen island in mirrored glass,” she exclaims. “The great thing about living in Vegas is nightclubs, hotels, restaurants—they’re constantly remodeling to keep up with the times, and a lot of the vendors in town have materials left over and I can get them at a discount.”

Check with the HOA before you paint the exterior

This is not the Marundes’ first rodeo. They know that neighborhoods have all sorts of restrictions about landscaping and paint color. So they smartly check in with the powers that be—the homeowners association, or HOA—and find that only certain exterior colors are allowed. They decide to freshen up this house in the mostly desert-colored hood with a pre-approved gray, which makes a nice transition to the blue interior.

If you can’t find prefab that fits, pick up a saw and build it yourself

Aubrey needs unfinished kitchen cabinets so she can paint them her beloved blue, but can’t find any that fit right, so she takes advantage of her handy husband. He builds not only the kitchen cabinets, but also a blue, space-saving barn door to go in front of the bathroom. By doing this, they save thousands of dollars, which helps them come in a full $6,000 under their $30,000 renovation budget.

But will that be enough to make this very specialized flip fly?

“It’s Vegas!” says Aubrey. “I do think we took a risk going with the bolder finishes, but I definitely think it’s going to pay off. … It has a Vegas nightclub feel, with big, open spaces. It’s a good place to entertain.”